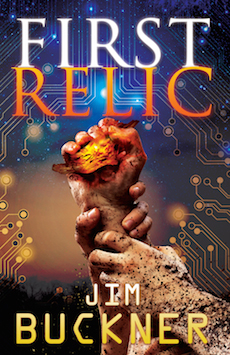 Jim Buckner’s world would be spinning apart—if only he could be certain it were real. As a button-down systems analyst with a disintegrating family, he’s unprepared to face the truth: a gang of telekinetic teenagers has been unleashed with orders to kill him before he discovers his full potential—the potential to manipulate matter at the molecular level with his mind.

Destined for a larger calling he knows nothing about, Buckner turns to his daughter’s mysterious friend for answers. She claims he must risk everything to steal an ancient relic, present at the creation of the universe, from an age-old cult sworn to protect it, all while rescuing his daughter from the telekinetic assassins sent to kill him.

In his genre-challenging, mind-bending style, David Mark Brown channels untamable thrills through the first-person character of Jim Buckner, who virtually leaps off the page in a series of escalating confrontations that leave the reader gasping for air.

Those familiar with Brown’s works (via the moniker of Jim Buckner) will recognize the terminus within the larger DMB universe from which First Relic buds. The uninitiated reader will appreciate this bold first book in Brown’s new Relic Hunter series for its pulse arresting pace and WTF moments. While providing insight into the DMB Files (as well as crossing over into Brown’s coming serial The Green Ones), First Relic also serves as an ideal spring board into Brown’s writings.

Whether arriving at First Relic as a newbie or a seasoned traveler within the DMB universe, the experience remains both indelible and tantalizingly frustrating. Reminiscent of The Terminator, Total Recall and The Matrix, First Relic will take you to the edge and leave you asking for more.