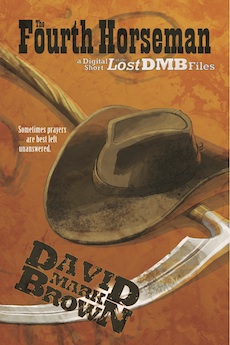 “A provocative moral tale as much about embracing life as meeting Death.”

Sometimes prayers are best left unanswered. After the equivalence of centuries worth of service as Death, the former man is left wondering whether dying would have indeed been a more desirable option. The buzz of phasing in and out of temporal existence and lopping off heads only lasts so long.

But when Death chooses to embrace what he recognizes as an “act of God,” he discovers his calling to be more nobel than he thought.

“Never has Death been so human as a kiddie pool, a folding chair and a bottle of regret. If only the other three horseman could be as easy to relate to.”