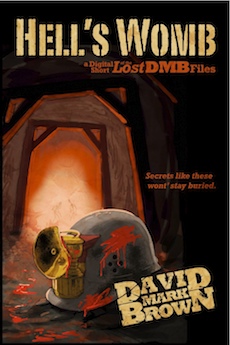 “More explosive than any of the Lost DMB Files thus far, Hell’s Womb provides an alternate explanation [for the disappearance of Thurber, Texas] completely scandalous and shocking in nature. As to its historicity, I’ll let the reader decide.” ~ Professor Jim Buckner

Four hundred feet below the surface of company-mining-town Thurber, Texas a dangerous experiment within a clandestine lab explodes. It turns out the handful of trapped minors and a mysterious, yellow-eyed scientist have more to worry about than fire damp and rock fall.

If the survivors can’t uncover the cause of the explosion while containing the monstrous threat it has released, thousands of others will suffer an even worse fate.

“Put on your worst pair of underpants. Hell’s Womb is just that scary.”