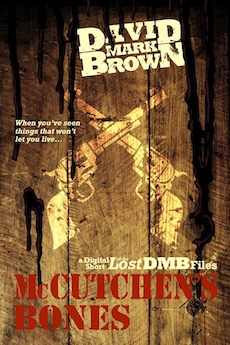 Kung Fu vs. a zombifying plague.

“Haunting and Emotional. If Ghost Rider were a cowboy, this would be his backstory.”

For a man who has the courage to look life in the teeth, everything is black and white. J.T. McCutchen has made a living by this philosophy. So far it’s served him well.

Busted down From Texas Ranger to private security for an oil company in a muddy boomtown, McCutchen is holding his life together via discipline and sheer will. But attempts on his father’s life combined with a plague ravaging the countryside threaten to open a closet full of bones. Now the ex-ranger’s about to learn, when you’ve seen things that won’t let you live, it’s either you or the bones.

“Originally published as part of a serial entitled, Reefer Ranger Rides Again, the short story McCutchen’s Bones appeared in a pared down manner, names and places altered to avoid undue scrutiny from the powers it laid bare. What you have before you is the unabridged version. Consider yourself forewarned, the contents of this horrifying and heroic tale are as volatile as a truckload of nitro-torpedoes en route to the oil fields described within!” ~ Professor Jim Buckner, Geology Dept.; University of Texicas

“A more efficient beauty amidst mud-encrusted gore can’t be found.”