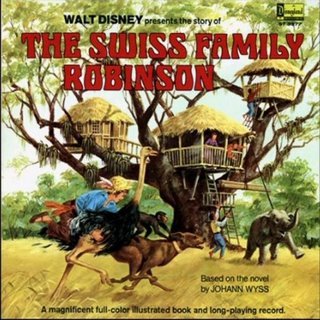 What could be better than to live in a sustainable dwelling that, as far as the government is concerned, isn’t even a dwelling? You’d have no taxes and very little zoning codes to deal with, while at the same time treading lightly on this whimsical little sphere we call Earth. “Wow, RedneckGranola, how can such a thing be possible? Since you are so often full of organic manure, I just can’t believe you.”

Yes, yes. I know. I too was once skeptical, as yourselves, until I realized all you have to do is be considered a nutjob and such a storybook living can be within your grasp. I’m not talking about living out of a Vanagon or VW bus (I said nutjob, not hippy freak!). For starters, I’m talking about tree houses.

Yes, full-size versions of your childhood escape. Who hasn’t fantasized about Swiss Family Robinson and dreamt of having monkey butlers deliver you breakfast in bed while nestled on a gently swaying branch? Well living in trees isn’t just for Disney anymore. And what started as a luxury getaway novelty has advanced into the realm of residential housing for the insane and daring (without sensible spouses, dagnabbit).

Click here, here and here for some great examples of living in the trees. Not only are these dwellings uranium PU-36 for the imagination, but most states don’t even consider them dwellings at all. It seems that some bureaucratic twitter-surfer without the foresight to know better decided that if a house didn’t have a foundation the government wouldn’t consider it a house at all. Suckers!

So for all you Montana Freeman sorts and folks who just like sticking it to the man, there is no better time to buy up a cheap piece of non-residential property in the hills and build your dream treehouse (or even buy one completely made for you). But if swinging isn’t really your thing, how about rolling? I’m not talking about retiring to travel back and forth between Glacier and the Grand Canyon in an RV. I’m talking about tiny homes built on wheels. Again, if the house doesn’t have a foundation, most places don’t consider it a house. And if you’re willing to sacrifice square feet you can even tow these things around behind your Vanagon! (you hippy freak!)

While most of us will continue to run the rat race weighed down by things like foundations, and all the government meddling that goes with them, maybe a few of you adventurous readers will be freed from the tedium to live in a non-housing alternative. At the very least, we can dream.[divider]

(If you want to share tree house designs let me know.)