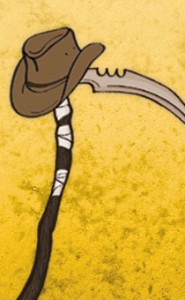 When you think about it, it makes total sense. Killing people at the fore of the apocalypse is dusty work, and nothing wets the old whistle like a stiff shot of tequila. Anywho, it’s time I bridge over to the official launching of the second complete Reeferpunk prequilla, Fourth Horseman. This little ditty is not so much the backstory on any of my characters, but a harbinger of things to come.

The hubris of mankind during my alternate history of the nineteen-teens and twenties leads to, among other things, the desolation of a large swath of Middle America (like the Dustbowl, but full of plague infected zombies). The southern tip of this dessert extends into the Texas Panhandle where we find a unique character, by the name of Death. Holed up in a tiny Airstream trailer with nothing but his wraith horse and a buzzard for company, Death spills over the failures and regrets of both his life and…, well, non-life.

Fourth Horseman is a human tale of desire and calling that begs us to ask along side Death, “Could I have brought down the sickle all those millions of times just cause of habit? A dadgum habit?” Eerie and poetic, Fourth Horseman sprinkles a healthy dose of grim humor over a slab of satire to create one hell of a short story sandwich, served on rye (of course). So why not kick off your spurs and have a bite? (Where else can you read a poem written by death?)[divider]