While these towers populated dozens of cities for almost half a century, illuminating city blocks with powerful arc lamps, they quickly dimmed into history’s forgotten archives. Bizarre to the modern eye, these towers often ranged from 150 to over 200 feet high and were used during an era when standard, smaller-sized street lamps were impractical and readily-available electricity had yet to burgeon. 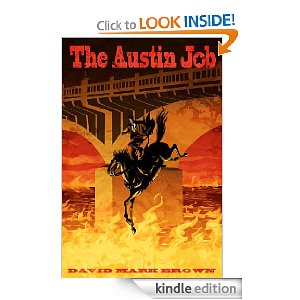 That’s right. December 10th is my birthday, and I remember the day like it was 37 years ago… “Good Lord! Are babies supposed to be furry?” Anywho, I’m celebrating by releasing a new novel, The Austin Job. To commemorate my glorious entrance into this world, I’m offering you the gift of escape from the drudgery of reality into a sensational world of adventure that will surely ruin you for everyday life. It’s the least I can do. So set aside some time to curl up with your smartphone or eReader and cinch your girth, because The Austin Job is a cheek-puckering exploration of a Texas you never knew (see below for more on the book).

But as we all know, I’m a demanding and delicate artist type always insatiably hungry for the approval of others.

Read moreHappy Birthday to Me

Where would lazy schmucks like me be without the gift card? I could write a sonnet to the gift card… if I weren’t so danged lazy.

But in some circles the GC (as it’s known in the biz) has become highly maligned as a gift indicating disrespect for the giftee and the whole gift giving process. (Personally I say it’s still a win/win, but what do I know? I think I’ve given someone a stick of butter for their birthday. Hey, it’s not like they were vegan.)

With the GC stolen from the holiday gift repertoire, where is the giving-impaired to turn? Well, if the person you are targeting has a smartphone or a tablet (iPad, Galaxy) or an eReader (Kindle, Nook, Kobo, etc.) then here is your answer. Gift card. Oh wait. I meant to say, eBook.

Read moreGifting an eBook for Christmas